Bulgarian Industrial Capital Association (BICA) presented the “Business to the Rules” awards for the sixth consecutive year. The awards were presented at an official ceremony in Sofia Hotel Balkan, and guests of the event were Deputy Prime Minister of the Republic of Bulgaria Tomislav Donchev, Mayor of Sofia Municipality Yordanka Fandakova, Chairmen of the Committees to the 44th National Assembly of the Republic of Bulgaria – Committee on European Affairs and control of European funds Christian Vigenin and Legal Affairs Committee Anna Alexandrova, Minister of Labor and Social Policy Biser Petkov, Minister of Tourism Nikolina Angelkova, ambassadors and more than 100 presentations and the government Sofia municipality, businesses, NGOs and social partners.

General Labor Inspectorate Executive Agency took the prize in the category “For a person or organization that contributed to the restriction and prevention of the informal economy through an active position”. The distinction was awarded for efforts to update the system for online submission, registration and reporting of templates for short-term seasonal farm work in a timely manner. The Director of the Risk Management Directorate at the NRA Nikolai Petkov, the Director of the Copyright and Related Rights Directorate at the Ministry of Culture Mehti Melikov and the Institute for Market Economics also received certificates in the category. 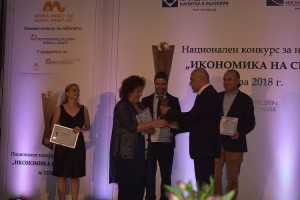 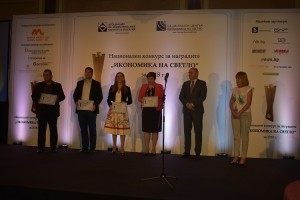 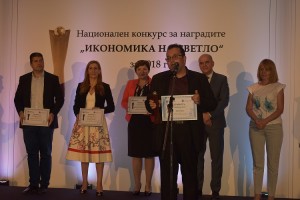 The Member of Parliament Hristian Mitev won the award for “For a legislative act or administrative practice that results in limiting the informal economy and improving the business environment”. The bill submitted by him for amendment of Art. 37, para. 2 of the Accounting Act, which reduced administrative and financial burdens for small businesses in the light, beat the competition of the National Revenue Agency, the Ministry of Tourism and the Legal Affairs Committee of the 44th National Assembly, which were honored with diplomas. Deutsche Welle’s Bulgarian edition is this year’s winner in the category “Journalist or media contributing to changing public attitudes towards intolerance to the informal economy”. The other nominees and recipients of the award were Nova TV journalist Georgi Georgiev, presenters of Bloomberg TV Bulgaria’s Business Start on Zivka Popatanasova and Hristo Nikolov, and bTV reporter Nelly Todorova.

The nominations for the awards were made through a broad public consultation among the members of Bulgarian Industrial Capital Association, all social partners, members of the Public Council for Restriction and Prevention of the Informal Economy, comprising representatives of a number of state institutions, and the media. The winners were cast by secret ballot from a large expert jury consisting of over 100 distinguished personalities: prominent economists, public figures, media representatives, members of the BICA’s National and Control Councils, the Public Council for the Restriction and Prevention of the Informal Economy, etc.

The competition aims to highlight and reward leading institutions and individuals with an active position and contribution to limiting gray practices. Thus, for a consecutive year, the BICA encourages active action in the fight against the informal economy and promotes the constructive role of business in society for improving the socio-economic environment.

For the past year, the Composite Index on Light Economy, by which BICA measures the bright part of the Bulgarian economy, rose by a record 4.55 points to 79.10. The Association has seen a clear trend of accelerating the shrinking dynamics of the “gray” economy over the past four years, falling to 21% in 2018.